I’m a 15 year radio veteran. I’ve seen the debate between high-end and low-end microphones both in-person and on internet message boards. Usually, the argument ends with snide comment like: “The Behringer is crap because it’s only $100 bucks!”… That’s not very scientific, so I wanted to study this on a technical level.

In my office is a Behringer B-1. I purchased it new in 2001 from zzounds.com. It’s widely known as a cheap, yet rugged starter microphone. I’ve use it to voice-track, cut voice-overs, and mic live instruments (the coolest being a 100 year-old cello). It’s a tough microphone. The kind of microphone you can toss into the backseat on the way to a gig and not think twice.

The Neumann TLM 103 is known as a high-end, yet affordable option for voice-over professionals. The Neumann name is known throughout the recording industry as THE microphone for vocals. It’s truly the Cadillac! There are three TLM 103’s in the building, one in each production room. Many of our DJ’s have them in their home studios too. Note: most radio stations wouldn’t dare spend $1,100 on a production room microphone.

What you’re about to see (and hear) is me talking into both microphones – unedited. To prove that I’m not swapping voice processors, you’ll even hear me changing out the microphones. I personally have no stake in the argument, I’m an engineer. I simply wanted to introduce a more technical point-of-view.

I grabbed the following specifications from each respective website.

Would you look at that? On paper, they both have the same specifications! Ok, I’m not going to dive into exactly how those parts are made, or the quality of materials used…but they should sound almost identical.

With this test, I’m recreating a (very) basic home studio. There’s no audio board, just the voice processor plugged into “Line-In” on the motherboard sound card. For both tests, the B-1 is set to “flat” as there is no low-frequency roll-off option on the TLM 103.

Now, let’s move into a real-live-working production room at a radio station. This room is “Prod 3”. It is used daily to voice-track shows and cut commercials. It features a flat-response 12-channel mixer, and a professional grade sound card – oh, and lots of foam on the walls.

Note: I used the same exact Voice Processor in each test.

IMHO: The B-1 sounds brighter and a bit “punchy”, while the TLM 103 sounds warm and more “mellow”. Overall, they’re not that far apart. (Really) That’s no surprise since their specifications and frequency responses are identical.

How? Quality of materials and parts used in construction.

What does that mean? Nothing. A Top-40 DJ might want to sound punchy, while a soft-rock DJ will want to sound warmer. Do you want to flaunt the name “Neumann” to owners of B-1’s on messages boards? Or do you want to have a fantastic sounding microphone for less than $100? In the end, it’s all about your budget and application.

A co-worker of mine, John Garrett, does voice-overs for a living. He started out with a Behringer B-1. He jokes all the time about how that “starter microphone” made him a living for a few years. (Last year he purchased a TLM 103).

John Garrett and I’s advice is:

Don’t worry about the microphone as much as the gear surrounding it.

When you’re both successful and have some extra cash, then take the leap and get the TLM 103. Just don’t expect gigs to flood in because you own a $1,100 microphone. 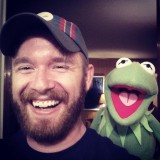 12 replies on “Microphone Shootout: Behringer B-1 vs Neumann TLM 103”

And If you EQ the B1, even with a 4 band one, you can get them really close that it doesn’t worth it paying 10x the price to get the Neumann unless you want a better looking microphone and a better brand name. Thanks for the shootout!

Great objective review! I agree with Nick, with a minor amount of EQing you can achieve the same tone from the B1 and save a ton of cash! Its all about the name on the box isn’t it?!

does your preamp have a setting for impedance? The TLM comes alive when it has a setting of 50 ohms, while the Beringer is to be set around 300 ohms. You will find they sound very different at the proper settings.

A guy on a local music exchange has a barely used B1 for sale for $50. I’ve never used a Behringer mic and am curious. Didn’t even know they made mics. I have a great Behringer bass amp, but, I’ve heard some sad tales about some of their mixers, so, I was on the fence about this mic. This review moved me to the buy side of the fence. Our private music studio has a mix of Shure, AudioTechnika, MXL, Sennheiser mics. This looks like it could be a useful addition. I don’t care about name dropping, just good sound. Thanks for the review.

I also agree with Nick and Greg. Besides, great post, Greg! I´ve been talking over and over to this mic test comparation to my friends and co-workers. Once I had a story that the B1 sounded “better” on a woman’s particulary voice” than an AKG C414. The singer, the producer, and the owner of the AKG agreed… kind a scaried….
Even a Neumann or top mic brands cannot sound good on specific source…
The GREAT GOAL is to have an “Arsenal of diffrent mikes”.
And sorry for my bad english.

Very truthful and solid. It´s all about preamps, signal flow and proper treatment.
Some high-end mics handle very loud sources way better than others and there CAN BE (not stating all cases) some signal to noise ratio diferences.
But now, on our new reality (High Quality Home Studios), i´ve come across with Sansom, Behringer, Superlux and other brands that REALLY surprise me.
As a producer, i say: don´t judge by BRAND and PRICE. Judge by EAR, sometimes by budget, but if it sounds good, i don´t care what name is written on it!
😉
Thank you for your article!

The Honda Accord and a Formula 1 both have four wheels, both burn gasoline, run the same size tires (approximately), and with modification, the Honda can put out the same horsepower as the F1, does this put them in nearly the same league for handling and cornering ability, etc?

Just because both mics are condensers, have a freq. range of 20-20, I could toss in the Rode NT-5 which boasts SMT components, transformerless circuitry, but I will hazard a guess might have a slightly different response curve than either the Behringer or the Neumann.

It is this response curve, more than any other spec that determines a mic’s sonic fingerprint.

Less costly mics tend to be less consistent from mic to mic, batch to batch, and use much less costly components in their circuitry, as well as often more complex architecture to create their sound.

This leads to manufacturers making their mics very bright, which can give the impression of “air” to the sound.

A mic with very fast transient response, a large dynamic range, small or gentle “lifts” which are to make up for high frequency loss due to distance from the sound source, are the things that truly give a microphone an airiness.

Try a high shelf EQ with wide Q and 6dB of boost at 5k with several mics, and see which tracks become strident and which simply get a huge lift in the high end.

So long as mic placement was good, the superb microphone will show themselves head and shoulders above the rest.

You may find some of those cheap mics are cherry’s, and perhaps a few are lemons, but even the lemons can be modified into much finer tools for short money if you are handy with a soldering iron.

I write all this simply to say, you typically DO get what you pay for when it comes to microphones, but you do need to do your homework!

Interesting and timely that I came across this story. Nice one!

I do VO professionally for a living (25 years as on-air guy at various radio stations, etc), and just last week, I noticed my beloved TLM 103 is over modding every so often on the occasional random word or phrase. It never used to do this, but last week, this ugly glitch reared it’s head. 🙁
Also, I don’t use any mic processor (my choice) and I get very professional sound with the TLM, mBox 2 and a Mac computer. That’s all I use….a very simple set up.

It’s an audible muddiness, or distortion, on harder sounds when reading narration scripts.
So, I called the audio engineer I worked with for many years (very experienced guy) and he said “Neumann sold the patent and everything years ago, so you paid far too much for a mic. Everyone now, can and is, making almost that same mic for less than half the cost.” He went on to say “A $150 mic os all you need.”

Neumann makes a lot of mics, and the 103 is not exactly the most pleasing of them.
The TLM-102 has a much more natural response curve, is a far more versatile mic if you can only afford one higher end starter mic, but is still one of Neumann’s toys (by comparison) assembled with SMT component circuit boards that mount with little tabbed plastic mounts.
There are tons of condensers that have 1″ diaphragms, 20Hz-20KHz operating bandwidths, need 48v Phantom Power (as opposed to lower, or the 130v systems), and are of transformerless design.
That said, the response curves vary wildly and the character as well as detail that can be captured varies to the point of absolutely mind blowing.
However, a Behringer B-1 and a Brauner (pick a flavor) both run through an M-Box and compressed down to MP3 are probably not going to sound miles apart.
Here is my question…
Given that there are listening options that destroy the beauty, subtlety, dynamic range, sonic image etc., of a recording, should we opt towards lower end equipment and be happy, or do we work our butts off and hearts out for working with and listening with a format that allows the full sonic picture to be reproduced as purely as possible?
This way, as people get better at their craft and or earn enough money to purchase even one amazing microphone and preamp, it will be possible to create sonic magic.
We are so entrenched in plugins and other toys ITB, the work of writing great music, practicing till it can be played without thinking about it, where the flub becomes part of the magic rather than the “Fix It In The Mix” element, and last but not least, the front end has been cheapened because we expect less from everyone, including ourselves.
As some one else has already stated, a varied mic locker is the ultimate goal.
There is a mic for every sound from LoFi to HiFi, but when we need that ultimate, I for one will pay anything I can afford to bring it to the artist who wants it.

Sorry to ramble folks.
The biggest factor in the sound of a recording from a mic in respect to the source will be placement.
Placement is everything when it comes to micing, and moving it even an inch or rotating it several degrees off axis will often make great changes in timbre.
This is your greatest ally, and a most important challenge to be worked out for every situation.

I don’t know if it’s me the B1 sounds like it has more sibilance and that’s just from you talking, imagine a singer. That’s why I’d have to for the TLM sounds better.

This site contains affiliate links to products and services. I may receive a commission for purchases made through these links.